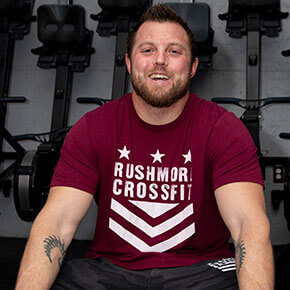 Colter Dunagan has seen both sides of the fitness continuum. He was a multisport athlete in high school and loved rock climbing outdoors in Colorado, but he became more sedentary while working toward a physics degree at South Dakota School of Mines & Technology. When he started CrossFit in 2013, he weighed nearly 300 lb. “I was super stressed out by life,” he said. CrossFit gave Colter an outlet for his stress and a supportive community, and reignited his love for physical activity. He also loved “how you can push yourself and set goals and achieve them,” he said. “There’s lots to master; lots to get better at and improve on.” Three years after starting CrossFit, he’d lost 100 lb. and was passionate about helping others have their own life-changing experience. So he became a coach. “I’ve always liked helping people, and I saw it as a way to help people achieve their goals and make everybody’s day better,” he said. “Come to class, spend an hour working out; everybody always walks out feeling better about themselves and a little less stressed.” Colter has been a CrossFit coach since 2014 and a part of the Rushmore team since 2016. He leads a weightlifting class twice a week at Rushmore and also coaches powerlifting for the Special Olympics. When he’s not coaching, Colter works as a manufacturing engineer for RPM Innovations—but what he loves most is watching people achieve goals they never thought they’d reach. “That’s really empowering for everybody, and you’re not really in a position in life very often to get to help people empower themselves, so I enjoy that,” he said. “And also just brightening everybody’s day or getting a laugh out of people and knowing they walked out feeling better about life than when they came in.” “CrossFit has been a wonderful and life-changing experience for me and as I coach I hope to bring that same experience to every one of the athletes I coach.”