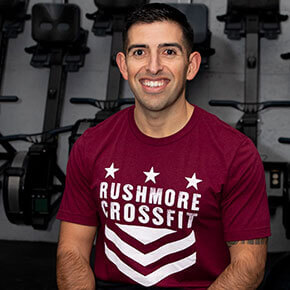 Daniel Hernandez discovered CrossFit in 2015 while on deployment to Kuwait with the U.S. Air Force. He’d seen a flyer on base for a CrossFit fundamentals class, and bored with the usual chest day, arm day routine, he decided to give it a shot.

“I got hooked from the first day,” he said.

As an Air Force Captain and lifelong athlete — he played baseball, softball, golf, and wrestled — Daniel was no stranger to fitness. Still, after starting CrossFit, he took more than two minutes off his mile time.

“And that’s just strictly doing CrossFit, not running outside of CrossFit or anything,” he said. “CrossFit’s made me more fit than I was before.”

But more exciting, he says, is helping other people get fit. He began coaching CrossFit in 2018 while on commission in Okinawa, Japan.

“Just making people better is really what got me into it,” he said. “Seeing that light bulb turn on when they’re doing movements and something kind of clicks.”

Daniel discovered Rushmore CrossFit while dropping in during the 2017 CrossFit Open before he left for Japan. He fell in love with the community, and so when he returned to South Dakota, he knew which gym to call home.

“Just the people pushing each other in the gym and outside of the gym,” he said of what he loves most about the Rushmore community. “It’s not just that one hour a day, work out, go home. They all try to be there for each other.”

It’s a good fit — because that’s exactly what Daniel’s mission is as a coach.

“My main goal as a coach is to bring out the best in people,” he said. “There’s a lot of self-doubt that people put on themselves. Whether it’s jumping up on a box or picking up a barbell, people don’t think they can do it, and they don’t realize what they’re actually capable of doing.”

When he’s not at the gym or on duty with the Air Force, you can find Daniel working out at home in his garage with his wife and three boys. He’s also working toward a master’s degree in exercise science with a focus on fitness and performance.

“I just want to be a part of that change in someone’s life,” he said. “To see them develop, whether they want to compete or whether they’re just there for overall health.”