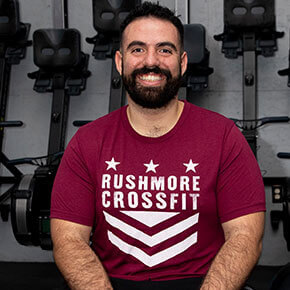 Emanuel Herrera had been an athlete his whole life—he played football and basketball in high school, continuing to shoot hoops through college. After college, he missed being physically active and the camaraderie of team sports. So when he found CrossFit in Mexico City in 2014, he was hooked. Not only did he get to learn all kinds of new physical skills, but he had found a fitness community. “People are always cheering for each other,” he said. “You feel that fire.” Emanuel has always had a passion for teaching and helping people—when he’s not coaching, he serves as a youth director at South Canyon Lutheran Church—and began coaching in 2016. He joined the Rushmore training staff in 2019, and says the best part about coaching CrossFit is building relationships with others. “If you don’t know the people you’re coaching, you’re not able to understand them,” he said. “I like to connect with them and understand what their background is; to engage and motivate them.” Whether you’re a competitive athlete or you’ve never stepped foot in a gym before, Emanuel’s goal is the same: to help you reach your “best potential,” he said. “It’s never too late to reach new goals and push yourself a little bit more and get out of your comfort zone.”