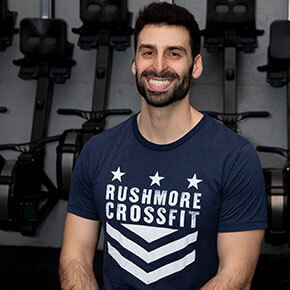 Michael Nemer understands the motivation problem. Though he grew up playing sports, once his collegiate baseball days were over — and the structure of daily team training was gone — he felt a little lost.

“(After) having practice and workouts required and part of your schedule for so long, when I wasn’t required to do so, I kind of chose not to for a while there,” he said.

Until he found CrossFit.

Initially, it was the CrossFit Games that piqued Michael’s interest. But when he tried it in 2016, he soon realized it was the community, accountability, and methodology that made it special.

“Just crushing a workout together and kind of suffering through it as a group was really appealing to me,” he said. “And so I felt like it was almost a love-at-first-sight-type deal.”

Michael loved the experience — and the results he was getting — so much that he decided to become a coach (prior to his role at Rushmore CrossFit, Michael coached full-time at CrossFit Tundra in North Dakota. He also coached high-school baseball).

“Just the opportunity to get to work with people of all ages and skill levels, I would say, is super, super fun,” he said. “It’s just really fulfilling to help somebody accomplish what they didn’t think they could. Whether it be with CrossFit training or whether it’s with nutrition coaching, helping people reach their full potential is super, super cool.”

Describing his classes as both high energy and laid back at the same time, Michael said he takes a flexible approach to coaching. He strives to be easygoing and approachable, while at the same time “I also pride myself on being able to (respond to) every member’s wants and needs,” he said. “So if one member wants to be coached a little bit harder, I want to be able to provide that intensity for them.”

Either way, the end goal is the same:

“I just want to provide people with the best hour of their day,” Michael said. “To help people improve their overall quality of life inside and outside the gym.”